There will be shuttle transportation available via Kobussen Bus Service from the Richland Center High School – times to be determined. This is for Friday, Saturday and Sunday.

There will be a scaled down version of the carnival on Friday, Saturday, and Sunday this year. Wristbands will be on sale but times will be determined and announced on Thursday.

The Richland County Fair Committee is trying to create the best possible scenario for this year’s fair in light of high water, saturated grounds, and the possibility of more flooding today thanks to heavy rains last night and early this morning. Fair officials have made the following decisions:

Be listening and watching for the release of a revised schedule for animal project check-in. Once that schedule is determined, officials will then look at how judging can be scheduled and accomplished.

Everyone involved with the Richland County Fair appreciates your help, support and understanding. 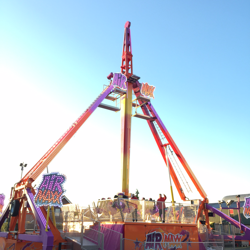 A new spectacular ride will have thrill seekers screaming for the 2016 season at Mr. Ed’s Magical Midways, LLC. “Air Maxx” will provide 360 degrees of thrills as it makes its debut this summer throughout Wisconsin’s finest fairs and festivals.
Manufactured by KMG Europe BV, Netherlands, “Air Maxx” will spin its passengers and soar them to incredible heights above the midway. Standing at approximately eighty feet in the air, the “Air Maxx” definitely lives up to its name.
Called the “Inversion” by the manufacturer, Mr. Ed’s Magical Midways, LLC coined the name “Air Maxx” for its newest thriller, which has colorful graphics along with stunning LED lighting. 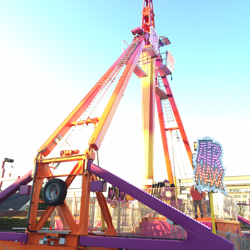 Riders are seated in twos, a total of twelve passengers maximum, with over-the-shoulder locking restraints securing them in place.
The loading platform floor, that passengers use to seat themselves in, retracts from underneath them, and the pendulum in which the seats are suspended, starts to gently swing back and forth between its supporting towers. In tandem, the seats begin to rotate as the ride reaches greater heights with every swing back and forth until it finally reaches its highest peak and makes a full 360 degrees completely over the top. The swinging action continues until finally the seats begin doing their own flipping towards the end of the ride generating more screams from thrilled patrons. 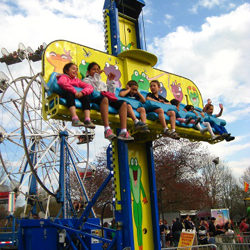 “Air Maxx” is designed to accommodate those at least 14 years of age and a minimum of fifty-four inches tall, but less than seventy-seven inches tall.
Mr. Ed’s Magical Midways has not forgotten about the little thrill seekers at its events! Also new for 2016, is an S&S Worldwide Frog Hopper. Seating up to seven patrons per ride cycle, the Frog Hopper takes it passengers nearly twenty feet in the air and features a series of drops. Little thrill seekers must be a minimum of thirty-six inches to ride.
So this summer, get ready! It’s sure to be a hopping good time for the little ones! As for the thrill seekers, get ready to experience 360 degrees of extreme thrills as you take a ride on the wild side with Mr. Ed’s Magical Midways and the “Air Maxx”!

Check out our Fair Food Vendors page for up to date information on all the delicious food available this year.

Check out the fun hands-on science and technology activities from 12:00-2:00! Families are invited to play with interactive toys and learn about upcoming STEM programs.  Activities are sponsored by the Brewer Public Library and the UW-Extension 4-H program. 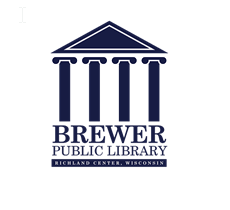 Get your kids charged up about electricity!
The Science Alliance is excited to announce a brand new fun-filled interactive show designed to demonstrate how electricity works! Utilizing fun displays and experiments, our presenters will educate your kids using hands-on interactions featuring the hair-raising Van de Graaf generator and the exciting buzz of the Tesla coil!Volunteers from the audience will use glowing tubes to build a human electric bridge while learning that static electricity is safe! They’ll see flashes of simulated lightning from a Jacob’s ladder and learn how different energies can be transformed into electricity. Conservation of energy and circuits will be discussed and several volunteers will help reveal how electricity flows and how circuits are created and broken. Zap! will illuminate the mysterious world of electricity by igniting YOUR kids’ curiosity!

More fun for the family to come so stay tune

Sign up to receive email updates and to hear what's going on at the Fair!

Persons are subject to potentially having their image and/or likeness reproduced for promotional and/or publicity purposes in Fair or media photography, video, broadcasts and/or webcasts.